Skip to Content
Home / Publications / How Syrian women are resisting patriarchy, the nation-state and the Turkish invasion 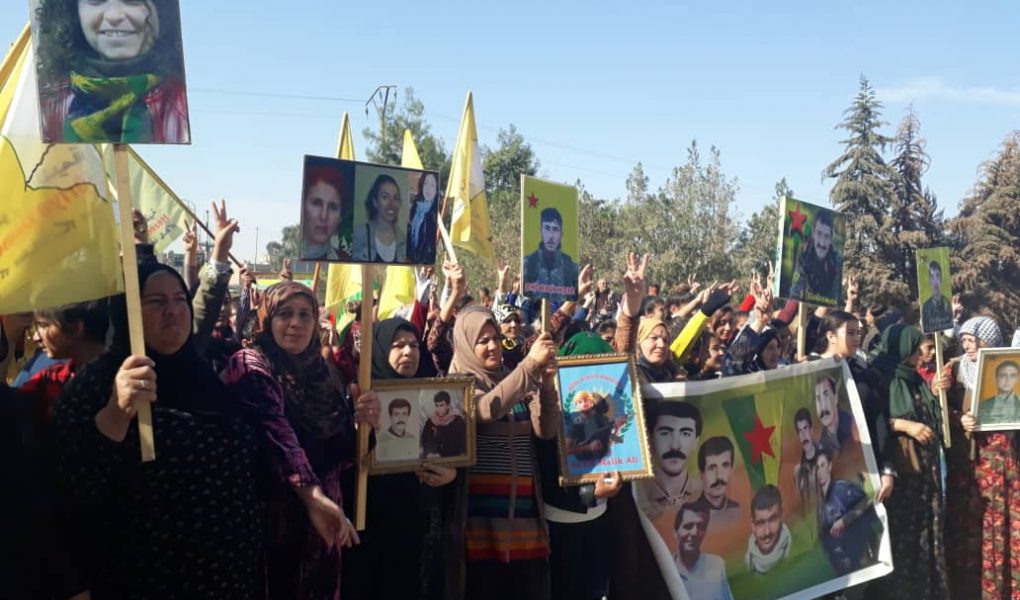 Out of the Syrian civil war, a revolution has flourished in a de-facto autonomous region north-east of the country: Rojava. The Kurdish nation has a long history of marginalisation from the states that occupy their homeland. Oppression of Kurds in Turkey dates back to the end of the Ottoman Empire and today, they are forbidden to speak their language and express their cultural identity. Set up in resistance to Kurdish repression, the Kurdistan’s Workers Party (the PKK) was founded 1978. Kurdish women, although sidelined by the PKK for many years, have always played a central role in Kurdish resistance as activists, community organisers and more recently soldiers. In north-eastern Syria, their resistance has been and remains pivotal to the region’s autonomy and safety for women.

Since 2011, the Kurdish troops have simultaneously been fighting Daesh while establishing direct democracy for all Rojavan inhabitants. This is implemented through a system of local people’s councils that rejects the nation-state. Each position of power on the councils is shared between a man and a woman. Women are free to run separatist councils and cooperatives to make sure their voices are heard. Streets and villages are organised into communes in which inhabitants have control over their own political decisions. Founded on the principles of women’s equality and social ecology, this radical political project is now being threatened. Nesrin Abdullah, the co-founder and commander of the Women’s Protection Units (YPJ) – one of the two main Kurdish armed forces in Rojava – explains that the Turkish government is using the remaining factions of Daesh and Al-Nusra, the Al-Qaeda affiliate in Syria, to target women and lay siege to Rojavan land.

“Founded on the principles of women’s equality and social ecology, this radical political project is now being threatened”

On 9 October, Turkey invaded Rojava, a few days after Donald Trump announced the removal of US troops from the region, enabling the Turkish military to swiftly move in. President Recep Tayyip Erdogan justified the invasion by saying that he wanted to create a “buffer zone” where he could relocate the 3 million Syrian refugees in Turkey, killing Kurdish fighters and civilians along the way, and stripping back Kurdish control of the region. In order to achieve this, Erdogan has struck a deal with Vladimir Putin to enforce patrols along the Turkish-Syrian border.

While the pretext for the Turkish invasion is one of necessity, the decision to invade Rojava is informed by Erdogan’s increasing dictatorship, oppression of Kurdish people and conservative gender politics. Professor Nadje Al-Ali, currently working at Brown University, points out that Erdogan’s mission to relocate Syrian refugees is a population transfer with genocidal implications: “Most of the refugees [in Turkey] come from South Syria. They don’t come from [the “buffer zone”] region at all so they would be displaced to an area that is alien to them. [Erdogan]’s not just saying okay, let them move there. He’s saying let them move there and let Kurds disappear. He is actively doing that by targeting them militarily.”

The Kurdish troops have responded to this attack and a full scale war is taking place in the region. “There are thousands of female fighters on the front line, protecting their people and protecting their land” reports Nesrin. “This is not something new for us. Since 2011, our land has witnessed attacks. Back then it was terrorist factions [alone] attacking us, now it’s the Turkish state”. The proportions of this war have thus become exponentially skewed in favour of Turkey and its jihadist affiliates. The Turkish government has deployed chemical weapons, white phosphorous, against the Rojavan people and seem accountable to nobody but themselves. The international community, who were swift to condemn Assad’s use of chemical weapons, have revealingly stayed silent. “This makes the Turkish state more courageous to continue its attack because there is no one asking him to stop”, says Nesrin.

In the YPJ, there are no fixed roles. Nesrin frequently acts as commander, fighter and diplomatic representative and her duties are ever changing. “In the approach of YPJ, there is no difference between fighter and commander. They are friends and comrades.” One of the challenges in establishing the YPJ was convincing people that women were capable of defending their community: “A big victory for us was making our community trust the power of women, to make women trust themselves and to make women trust each other.” It’s this faith in women that Nesrin believes fuels the jihadist and Turkish attacks. “They’re convinced that the power of women can defeat them. That’s why they’re attacking us.”

For women in the Rojavan city of Al-Hasakah, resisting the Turkish invasion has become part of daily life. Hebûn, who works for the Kongreya Star, an umbrella organisation for the women’s movement in Rojava, explains that many people are displaced, and women have been forced to flee their homes: “A lot of them are sleeping in schools and in one classroom you’ll have four or five families. There’s no privacy for them or access to supplies.” Protest has become routine. Children will join women after school to read poetry, sing and make their voices heard. Demonstrations against the Turkish invasion are held regularly to say: “We, the women of Rojava, are speaking up, and we don’t want you here.”

Prior to the invasion, the Kongreya Star was organised in every town and village in Rojava. They set up committees for self-defence, housing and education while funding women’s co-operatives and communes. This work has now become more difficult, or even impossible, in areas occupied by the Turkish military. “Between Gire Spî and Serêkaniyê, they cannot go on with work” details Tina Heinle, who works on the organisation’s #WomenDefendRojava campaign. “Most of them fled and the people who are living under occupation cannot continue their work because they would be under immediate death threat.” Tina tells me the story of Hevrin Xhalef, co-chair of the Syrian Freedom Party, who was ambushed by jihadist groups: “She was torn out of her car by her hair. She was tortured and then executed with shots in her head.” These same jihadist groups post videos on social media of YPJ fighters being jeered at, and their corpses brutalised. These jihadist groups are the very same people that the Turkish government are recruiting to target and kill Rojavan women and Kurdish troops.

Resistance to the Turkish invasion is conducted by many different kinds of women, military and civilian, old and young. Şerîn Faho, a member of the HPC Jin (Women’s Social Defense Forces) which acts as a grassroots organisation providing security for the region – a radical form of community policing – describes the Turkish invasion as a fundamental threat to her community and their safety. She tells me about the reported use of chemical weapons by Turkish forces, remarking “The Turkish state has thrown phosphorus at our kids.”These jihadist groups are the very same people that the Turkish government are recruiting to brutalise Rojavan women and Kurdish troops”

Separate from the military, the HPC creates safe zones for their local communities and distribute arms and training to women. “At the start of the civil war”, Şerîn explains, “all the young people went to war against ISIS. Our towns and villages became empty and vulnerable. We were forced to create this community for mothers and fathers so that they could protect themselves.” The purpose of the organisation is to give older people a role in the resistance. Each person is responsible for keeping their streets safe and they coordinate funds and points of contact vulnerable families. “When one of the women dies, we arrange funerals for them. We have to create processions and make sure that they’re commemorated in the appropriate way because we have martyrs as well.” The HPC Jin resolve domestic disputes and set up check-points against Daesh and jihadist groups that target their communities. Şerîn explains that she’s always on call: “If someone comes to me in the middle of the night, I have to be ready to leave my house and go help.”

Şerîn balances these grassroots efforts with everyday household chores and raising five children: “I wash my clothes. I go to the market and get the vegetables” she explains. “I’m just woman that lives within the community that wants to help the community”. A few HPC members are ex-military, but most of the organisation is comprised of civilians: “Some of us are 60- 70 years old.” says Şerîn, herself 43 and a mother of five: “Sometimes we’re forced to raise arms but that’s not the reason for our existence. We just want to be safe.”

Women in Rojava are fighting to defend their land, the threat to which has now been compounded by one of the biggest militaries in Europe. Those who have spoken to me have said that their resistance spans across ethnicity and religion. This isn’t a movement just for Kurdish women, but all Syrian women; they know what Turkish occupation will mean for them. Tina tells me that a common sentiment from Syrian activists is: “we didn’t liberate this area from Daesh to hand it over to Turkish occupation”. Turkey has proven itself loyal to Turkish imperialism by employing the jihadist groups who have brutalised women during the Syrian civil war. Building on a long history of communal resistance, Syrian women have rallied out of necessity. The cost of freedom is a small price to pay in comparison to the violence being weaponised against them by the Turkish government. 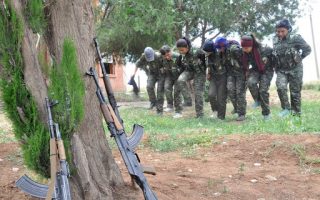 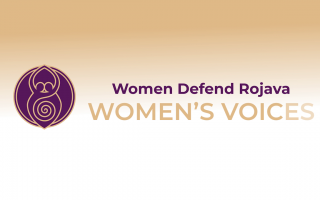 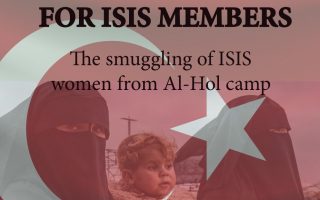