Skip to Content
Home / Publications / Foza Yûsif: “2020 will be the year in which women’s revolution will become permanent”

In the interview with Foza Yûsif, Executive Committee Member of the Democratic Society Movement (TEV-DEM), she made important assessments on the developments and women’s work in northern and eastern Syria in 2019. She described the establishment of the women’s council in North and East Syria as one of the biggest gains of women in 2019, and said that women through this council now have a organized power to solve their problems.

In her analysis she underlines that together with the Northern and Eastern Syrian Revolution, women’s power affects the entire world and is a torch gathered around for all those who struggle for freedom.

At the same time Yûsif pointed out that the ruling powers fear the development of women`s struggle and added: “Because revolutionary women are shaking their empire based on violence, oppression and reaction. They are like bats, afraid of light, living in darkness and dying in darkness. They are trying to take revenge on our illuminated democratic system by attacking women.

How do you evaluate the military, political and social work carried out by women in 2019?

In the last 8 years of the Syrian crisis, Northern and Eastern Syrian women have been in constant revolution and struggled. Every year, women have taken new steps to enlarge the women’s struggle. In my opinion, one of the biggest gains of 2019 was the establishment of the “Women’s Council of Northern and Eastern Syria ”.I think this was a historical step. Because the council is struggling for women to adopt a common attitude with their activities in changing and developing society. Of course, with the presence of many women’s organizations, this council will have the function of a women’s parliament. Because in this way the problems that women experience here are handled and evaluated from a different point of view and they will continue to be evaluated. Of course besides this, it makes women an active force in social, political and cultural activities.

The participation to the council of women of different ethnicities of the region has improved significantly. This is very important in terms of collective work and ability of benefit from different experiences.

YPJ TOOK REVENGE OF THE WOMEN EXPOSED TO ISIS ATROCITY

Another historical achievement of women is the war waged by the Women’s Defense Units YPJ against ISIS.Women’s participation in the struggle against ISIS is a very important achievement for women. YPJ took revenge on all women who were raped, sold and subjected to violence by ISIS gangs. Women’s struggle and success is a struggle and success against the patriarchal minded terror system of thousands of years. In that respect it is extremely important and valuable.

AN ATTACK SHOWING THAT ERDOGAN IS AN ENEMY OF WOMEN

It is also important and sacred that women in the ranks of the Democratic Syria Forces (QSD) take part in the Honor Resistance against the invading Turkish state and its gangs. The resistance of the Ronahis, Zins and dozens of their comrades affected the world. The martyrdom of Hevrîn Xelef Syrian Future Party General Secretary and the mother Aqîde had a great impact on human conscience.It has shown to the world that Erdogan is an enemy of women, that he is ISIS himself and that he is hostile to all kinds of democratic liberation movements.

Women in northern and eastern Syria carried out many actions. How do you evaluate these actions?

In the sense of mentality of all segments of society; family, women, men is very important to ensure progress. As much as women and men have a democratic, conscious and society-individual understanding, society becomes healthy and solid.

FAMILY, WOMEN AND MEN’S RELATIONSHIPS NEED TO BE RESTRUCTURED

Family is important for human formation. People are first educated in the family. That school should be developed continuously.Because parents are the first teachers of the individual. A non-successful teacher cannot raise a successful generation. Therefore, the actions carried out by women’s organizations are important and necessary.We all need to know how to live, how to exchange with each other, and how to create a developed family life.We also need to restructure our relationship with the family. Because a decline in the family mentality brings with it a mental crisis and has other consequences. Therefore, new measures are needed in male-female relations. We must fight against the phenomenon of violence against women in the family.

We should also know very well that the struggle for women’s for liberation is also a men`s struggle. Because a man who has respect of his self and give value to his life wants to live with a free woman who has a free will and understanding. Living with a servant doesn’t mean friendship. Is a relationship only in the framework of the slave-owner , which means the decline of society.

In addition to these, there was a remarkable participation in the actions and activities organized against the occupying Turkish state. Connected to this, the mothers of martyrs became a symbol of honor with a brave and altruistic attitude against the invaders. Their reacting to the martyrdom of their children with the zilgit (traditional women`s victory scream) was a great source of power for those who resisted. This showed that hero mothers created heroes

Since the beginning of the Rojava-North and East Syrian revolution, the Turkish state and its gangs have targeted women in particular. The murder of Hevrîn Xelef shows it in the most clear way. Why do you think women are targeted in this way?

Yes. Erdogan and his gangs are afraid of free, brave and conscious women. Because their reactionary systems are based on the willless and slave women and despot men. They are not only afraid of our power as women, they are also afraid of our dead bodies and they are trying to get revenge on them. Also the dead bodies of Şehit Barîn Kobanê and Hevrîn Xelefin had been subjected to gang violence.

WOMEN ARE SHAKING THE EMPIRE OF DARKNESS

They have a grudge against women. Because revolutionary women are shaking the empire they created over violence, persecution and reaction. They are like bats, afraid of light, living in darkness and dying in darkness. They are trying to take revenge on our illuminated democratic system by attacking women. Because they know well that women are the foundation of the social system, and enslaving women means removing society from being a society. Therefore, it is not a coincidence that they target women, it is the politics and ideology that the AKP is based on.

WOMEN’S FIGHT HAS BEEN TURNED TO THE TORCH OF FREEDOM

Women’s power affects the entire world and became a torch gathered around it all those who struggle for freedom. Erdogan mentality wants to extinguish this torch and break the hope of women. against this, the Women’s Revolution insistently persists and continues to evolve. Targeting women does not break our will, on the contrary it shows that we are on the right track and make us to embrace to the struggle more tightly.

Which message do you want to give to women for the year 2020?

As a women’s administration, we realized a social revolution. No power can break our hope of free and honorable life. Rape and immoral attacks on women’s dead bodies cannot make us step back. On the contrary, it gives us strength to continue on our way.

2020 WILL BE THE YEAR IN WHICH WOMEN’S REVOLUION WILL BE PUSH FORWARD AND BECOME PERMANENT. 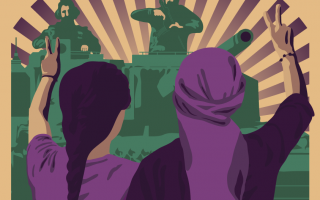