For all the women who are struggling for democracy and freedom

We respectfully remember the Mirabal sisters who were brutally murdered in the Dominican Republic on 25 November 1960 in the struggle against the Trujillo dictatorship. In the personalities of these women we see bravery, beauty, these women who became free from the authoritarian mindset of the man. They greatly resisted brutal attacks, slaughter, and destruction from many sides, and by doing so, with honor, opened a new way for women. We remember them with respect and gratitude. In addition, all women in the world who are resisting for a common struggle, for legitimate defense of women, against fascism, capitalism, and gender based violence, to the product of your thought and action, we salute you.

Despite the bans and restrictions imposed on Covid-19, the protests of 25 November 2020 met with sustained and organised protests by women worldwide. Actually we are in a time that all over the world that violence against women and political attacks against women are becoming greater and becoming more systematic. In every corner of the world womens resistances to stop this violence and protect their rights is unprecedented. In this years Nov 25th action, the message is unity of womens’ organization, and legitimate defense. Feminicide is the foundation of the elimination of society, without women a society cannot thrive. A multi-faceted and strategic war is being carried out against women. Women all over the world continue to struggle in the broadest sense and with intellectual activities that go ever deeper. But before we can reach national unity as women – the desired outcome of this struggle – we must first accept the truth that violence against women at the global level has reached the level of war. Women in this years Nov 25th actions, with knowledge and truth, will once again show that we will protect free women and free life.

Everywhere in the world women in this period of Covid-19 pandemic are experiencing real violence and exploitation of labor within their homes. In the health workforce, 70% are women. Women workers are risking their lives in unhealthy conditions to work. Moreover, many areas of the world women are still seeing much physical violence and are being murdered by relatives closest to them. Despite that it has signed the Istanbul Convention on the Protection of Women’s Rights and Protection of Women against Sexual Violence, many contracts are suspended or, with certain clauses terminated in these contracts, these contracts cannot enter into force. This shows us that the state forces of the world are working with shared strategy on the subject of violence against women. Only a women’s revolution that develops together with understanding and organisation can challenge and defeat the strategy of the states.

The massacre of women on 23 June 2020 in Helinc, Kobanê, and the massacre of women in Efrînê, the preparation of the 74th massacre against Sinjar, which is being carried out with the support of the PDK, showed that the fascist AKP government, the MHP and Erdogan are hostile to Kurdish women, the female resistance fighters and women of the Middle East, who are leading the women’s revolution, and take revenge on these women for speaking out against their occupation plans.

As women in the North and East of Syria, we are determined to resist the attacks against our country and our people and to thwart these attacks by building and promoting a women’s revolution. This year we showed this determination with our actions and our resilience. Despite the attacks of the Turkish state, we are constantly fighting against the multiple attacks on women. Our region is still a war zone. In this region, many forces and especially the Turkish occupying state want to exploit women through prostitution, smuggling, rape and drugs and leave them without an identity. Violence against women, marriage of minors and poverty, hardships that because of the economic crisis are all emerging, all subjects that we are struggling with every day. Furthermore, the struggle we are developing in the Middle East is a struggle that comes from the native lands where we are living, but the struggle is international and does not draw borders. We are all resisting against the hegemonic and patriarchal system, together at the same time. Within this resistance, the biggest inspiration we have regarding the thought and action, is the enormity of the womens freedom movement of the world. The widening of the women’s liberation struggle and especially the deepening of the vision of common organisation and self-defence increase our expectations and insistence on the struggle. Like all women in the world, we value our leading role in the struggle for freedom, democracy and peace.

For the sake of these principles and to improve the understanding of womens freedom,we are giving education on the basics of freedom and making big changes. Also we are democratizing households and family dynamics. In the year 2021 in all of our places we are holding these educations on an even wider scale. Educating the whole of society and stopping violence against women in our own countries in the next year is our main goal and top priority. With the knowledge that all violence against women is political and the ideological foundation regarding sexism and gender discrimination, we will unceasingly strive to meet our goal for the year 2021. As women from the north-east of Syria, we will push and advance our revolution with great perseverance, determination and love, which is hope for all women in the world.

We hold gratitude in memory of all the women of the world who gave their hearts and souls in order to accomplish this revolution. We call upon the rest of the women who in every moment, in every area of life is struggling for freedom, to discredit and abolish the Sinjar massacre 74 and give strength and solidarity to the resistant women of Sinjar.

Kongra Star: “No Kurd can remain silent in the face of the attacks on Makhmour and Zînê Wertê”

Call for the internationalist day of action on 14 December 2019 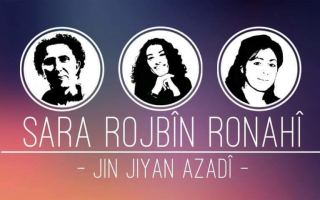 Kongra Star – With the spirit of Sakine, Fidan and Leyla we continue our struggle for women’s liberation