In the figures of the mirabel sisters and the immense sacrifices of our comrade Amara, Hevrîn, and the revolutionary efforts of Dayika Eqîde we remember the efforts and sacrifices of all women for their lands, identities, and to defend the essence of society. Once again, we promise on the şehîds of this honourable resistance to intensify our struggle against oppression.

Throughout history, women who have stood up, resisted and struggled against oppression and the dominant male mentality have come face to face with brutal attacks. This is also the story of the three sisters who refused to bowed their heads and struggled against the Dominican state. The system of male dominance sees women with knowledge, who resist for society, as a danger to itself. It uses the dirtiest tactics and schemes to destroy them physically, mentality and spiritually. We began our struggle with this knowledge and we set out on the path of struggle to develop the force of women’s self defence so that we can rise up against all the brutality that has been inflicted on women.

In these times we are now living, women’s struggle is clear, all over the world and particularly in the Middle East. The system of oppression is today gathering all its forces. It is absolute reality that these forces will seek to destroy, with every bit of the force they can muster. The weapons of the forces of oppression against society have for the last ten years been the brutal gangs who seek to annihilate society and its values. The head of all these gangs is ISIS, who struck fear into the whole word, and under various different names has created hundreds of groups. These groups are a product of the mindset that the capitalist system relies on. The roots of the brutality of these gangs is the hidden face of the nation states. At the forefront is the occuppying, murderous Turkish state and its accomplices, and the whole bloodthirsty system which today has again determined to defeat our struggle, by attacking the revolutionaries Hevrîn Khalaf, Dayika Eqîde, Amara and hundreds of other comrades. This determination is to annihilate the values of society. This plot is fundamentally for the destruction of all the achievements the people’s revolution has reached, and the 9th of October of this year will go down in history for our people with a heavy meaning.

We come to the 25th of November in this historical time of struggle. Once again history repeats itself, in the stories of our comrades Hevrîn, Dayika Eqîde and Amara. The Turkish state and its gangs kill our comrades with such brutality, play with their bodies, and spread this all in the media, with a goal. This level of brutality reveals the forces of dominance. Confronted with this brutality, we say that if women want the 25th of November to have significance, we need a new level of struggle and to find again the original meaning, in solidarity and strength of spirit. Wherever in the world you may be, let every women, collective and organisation struggle for women’s and society’s freedom. Every woman must take her own place and her role of leadership. The struggle for freedom is so powerful that no amount of violence, or occupation can crush it.

On this basis we call out to all women in the world, to join hands and raise our voices against the occupation that is today inflicted on the women of the Middle East and everywhere that the threat of violence and occupation is made. The struggle of the Mirabel sisters lives again today in the struggle of thousands of women. We are ready to pay any price to defend the achievements of women’s struggle. For the hopes of the sisters, for the struggle of our comrades Hevrîn, Dayika Eqîde and Amara, for all our thousands of şehîds, we will still more intensify our fight in our legitimate right to self defence against occupation.

With this thought and faith, we come upon the 25th of November. We salute the sacrifice and struggle of our sisters and our mothers, give our greetings and regards, and once again remake our promise anew to our şehîds 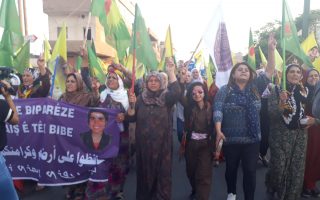 [Video ] On the ground in Rojava: War crimes of the Turkish state and women’s resistance against occupation

Information dossier on the triple femicide in Helincê, Kobane