Skip to Content
Home / Global Solidarity / “Beyond 25th November”: To all women who resist fascism and fight for freedom

To all liberationist women who resist fascism

We salute the courageous women who, with great determination and enthusiasm, carried out direct actions on November 25th all around the world. With the hope that the powerful stance women displayed on November 25th will advance the women’s freedom fight in 2020, and that this fight will be organized at such a level that it will put an end to the genocide imposed on the people, we call on all women to intensify the fight.

This year, the women’s movement in North and East Syria carried out the November 25th acts with the slogan “Occupation is Violence. Defeat occupation and fascism with the spirit of Hevrîn,’’. This year’s 25 November activities commemorated Hevrîn Xelef, the Syrian Future Party Secretary General; Dayê Aqîde, a member of the Women’s Justice Assembly; and Amara Rênas, the YPJ fighter, who were murdered by the jihadist gangs of the Turkish state. Throughout the whole of North and East Syria, we focused our November 25 activities on explaining, making visible and protesting the effects on women and children of brutalities that have become the norm in our land: war, displacement, demographic change, and cultural genocide. Indeed, violence is constantly imposed on our geography by international forces in a systemic manner.

We, women, are working to create codes of not only physical resistance but also cultural, philosophical, aesthetic and moral resistance to these forms of violence; because the main purpose of the Rojava women’s revolution is
to make life free by eradicating violence and resurrecting the culture of peace. Women’s movements and figures from the diverse populations living in North and East Syria – the Arab, Assyrian-Asuri, Armenian, Chechen,
Circassian, Turkmen and Kurdish peoples – have declared this purpose with a common voice and heart. Defending and expanding the values ​​of the women’s revolution is essential. We believe that the catalyst for the unity of peoples must be by way of an alliance among women. With this belief, we will rid our lands of the culture of violence.

This is the assertion we put forward with the diverse acts we carried out during November 25th: speakers’ panels, seminars, workshops, conferences, marches, press releases, etc.. And now too, in every
field and under any condition, we will continue our struggle against war, forced migration, demographic change, domestic violence, state violence against women, and all forms of cultural genocide.

This year on November 25, in many countries around the world, there were acts of great determination, courage and assertiveness. The dance-song protest launched by the Chilean Las Tesis Feminist Collective was quickly
adopted and performed by women all over the world. Tens of thousands of Turkish, Kurdish, European and Latin and North American women expressed their rebellion with this action, in all their different colours.
Coming together before state institutions in different countries around the world women shouted out with a single voice, condemning the state, judges and heads of state for having the leading share of responsibility in the
rapes and murders of women, war, and all forms of violence against women. All of these women demonstrated their determination to combat all forms of violence against women with a common voice. The type of direct
action launched by Las Tesis’ showed that women can unite all over the world when they find alternative, creative, and motivating forms of direct action. We saw how direct action enhanced the organization of women,
and women’s organization in turn enhanced organizing and direct action.

The change in 2019 of Sudan’s anti-women laws brought about by the Sudanese women; the campaign launched by thousands of Russian women against oppressive standards of beauty; the Swiss Women’s Strike against
sexism and violence against women with the participation of thousands of women there; protest marches by thousands and thousands of women against violence against women in Mexico, Spain, Belgium, Lebanon,
South Africa and France; and all of the many more women’s actions carried out this year for November 25 once again proved to the world that the 21st century will be the century of women. As one of the main dynamics in
the women’s revolution of the 21st century, the women’s revolution in Rojava and North and East Syria sends strength and morale to these actions, and in turn is nurtured with strength and morale from these actions.

We enthusiastically salute all of the world’s women’s direct actions as well as those instigated by Las Tesis. Once again, with the spirit of Hevrîn, we vow to the women of the world that fascism, male-dominated power and
colonialism will be defeated and the fight for women’s freedom will grow and be victorious.

The 21 st Century will be the century of Women’s Freedom!
Long live the Rojava women’s revolution!
Long live the democratic union of the peoples!
WOMAN-LIFE-FREEDOM! 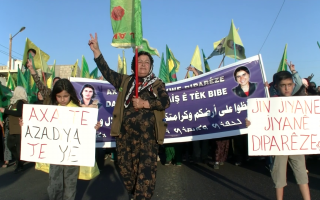