Skip to Content
Home / Publications / Kobane: young women are still not willing to surrender to the darkness of death

It’s impossible not to be affected by the image: a mannequin showing the latest fashion trends a few centimeters from a barricade. Kobane continues her life, but she is also ready.

You don’t need Erdogan’s verbal threats to know that one of the next stages of this long war will be the attack on this city, that is emblematic of the victory against IS. If they succeed in dividing the area of the Autonomous Administration of North and East Syria, Kobane will be isolated, and the imperialist ambitions of Turkey and its allies will have a strong chance. But an opportunity does not mean a victory, just as an attack does not mean a defeat, as Kobane taught us well a few years ago.

At one point in the war against IS, when all seemed lost in the city, a group of courageous women defenders of freedom decided not to give up, to stay and resist. Thousands of young people had come from all over Kurdistan and from other parts of the world, especially from Bakur (northern Kurdistan, under the Turkish state). Young people who, with only a few hours of training in the use of a Kalashnikov, were determined to go into battle because they were not going to give up their land and their values to Islamic fundamentalism. Young people who today rest in the cemetery of Kobane, but who have not died; as they say here, the şehîd never dies because their struggle still drives the struggle of millions of young people today. It may seem like a slogan, but I can assure you that here you can feel the reality inside yourself and in every step you take when you walk through the şehîds’ cemetery in Kobane.

One of the young fighters was Şehîd Arîn Mirkan, who decided that she would not allow IS’s tanks to advance another millimetre, and went to meet them in a self-sacrificial action. That action inspired the other fighters and with this example of dedication and strength they were brave enough to defeat the jihadists. Kobane was freed and today an imposing statue remembers the young woman who led that heroic resistance and unforgettable victory.

It is one of many memories of the battle. Like the cemetery of the şehîds; the names of the streets and neighborhoods that commemorate the şehîds; the thousands of bullet holes that you on every wall of every house; the area of the city that has been left for the memory of the resistance as it was after the battle, with its collapsed buildings, its burnt-out cars that used as weapons by IS, the thousands of shells that you find on your way through the buildings to where the frontlines were… Because every street and every house was a trench of resistance, and its walls are those of a city marked by its inhabitants.

Today the city is threatened again, but other young women are still willing, like Şehîd Arîn Mirkan, not to give in to the darkness of death. They are still willing to defend their land, to defend values opposed to imperialism and exploitation, and they are putting their lives at the service of that history and that cause.

These young women are waiting in their bases for war, but it is not coming. They take pictures with their cell phones and talk to their friends, watch movies and eat potatoes and drink soda. They go on with their lives, but they are ready. Because at 19 years old, after more than 8 years of war in Syria, they have hardly known life without the threat of troops, tanks and bombings, without burying friends and relatives too young, without the constant doubt of whether you will be able to stay in your land or you will have to leave. And as Kurds, never until the Syrian war began and with it the revolution had they known anything like freedom. And sometimes they hear songs about their land, Afrîn, about the land that has been stolen from them, about their people who have had to leave their homes in the face of the invader, and they cannot help but be moved to anger and sadness. And sometimes they go to see families to explain the situation raise morale for when the attacks start, and the families see that young people from all over Kurdistan and the world are still coming to the city because they are not going to surrender after so much was sacrificed, because they are not going to leave their people at the mercy of the bombs and the terror of the fascists… And sometimes they spend the night awake so that the rest of their comrades, who were not feeling well that day, do not have to do their duty.

And they, who have the fireproof spirit of young women, sometimes get angry because the war is not coming, and they have to wait, and spend many hours sitting in the base without much to do. Because they have not been “given live to sleep: they are given life to keep watch over the long night of their people.”* And they want to go back to their villages and continue working for the revolution in their usual roles, because sometimes it is difficult to feel useful in the long wait. But they wait.

Kobane is going on with her life and is ready, thanks to these young women. Those who make sure that the sacrifice of Şehîd Arîn Mirkan is not in vain. To those who make sure that şehîds do not die because they continue their struggle. To those who make sure that while the mothers cook the food, the children play in the street, the sellers walk around with their cotton candy carts and the people walk among mannequins and barricades, while the people sleep, someone is awake for everyone, someone is still walking among the bitter dust. Someone assuming the voice of their people who have made resistance their life thanks to so many people who have put theirs at the service of collective good, since they are clear that the only option for their people is to defend themselves and they are well aware that they if you are not a people, you are nothing.

*Translated from “no les han parit per a dormir: les pariren per a vetlar en la llarga nit del seu poble” this and other italics are fragments of the Catalan poem by Vicent Andrés Estellés “La veu d’un poble”. 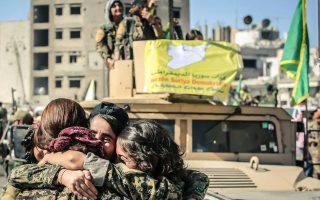