Skip to Content
Home / Publications / We must stop the attacks of the Turkish state! We women defend Rojava!

This is a direct attack against us as women! This is an other femicide comitted by the fascist Turkish state! Against our self-organisation and fight for women‘s liberation!

For years, women in North and East Syria have been organising themselves and fighting against the patriarchal mentality and for a change in society based on the liberation of women. From the beginning on Kongra Star, as women‘s movement in Rojava, played an important role for women‘s liberation and was build up to strengthen as well as organise the women. But also here they try to destroy these steps of women. We saw this clearly in the assassination of Hevrin Khalaf, the General Secretary of the Syrian Future Party, who was killed in October 2019 during the last Turkish invasion. She too was an example of a woman who, through her policy, was committed to women’s rights and a pluralistic Syria.

Furthermore we also cannot forget that today’s attack took place in Kobane two day before the anniversary of the Kobane massacre. As city Kobane became a symbol of the resistance and defeat of the fascism of the Islamic State. Five years ago, on 25 June 2015, jihadists dressed in YPG uniforms entered the city and killed 252 people, including 35 children and 64 women. The Turkish state has the same brutal mentality as the Islamic State.

That is why we call on all women in the world to stand up against the war crimes committed by the Turkish state, to denounce the responsibility of Russia, as they are controlling the flyzone over Kobane, all NATO member states and all organisations, such as the United Nations, which turn a blind eye to the human rights violations committed throughout Kurdistan.

As Women Defend Rojava we call on all women to defend Rojava and Kurdistan against fascism, and to organize actions, demonstrations or rallies. We call on them to spread the atrocities of the Turkish state and to put pressure on those responsible. We call for taking our role as women and defending life against fascism. Let us organize our self-defense together as women worldwide! We have to end this patriarchal mentality!

Open letter to NGOs accredited to the UN 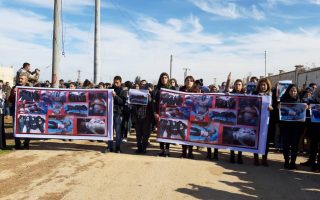