In memory of our three friends who were murdered in a targeted drone attack of the fascist Turkish state on June 23 in Helincê, Kobane, we publish this dossier. It sheds light on the role of the three women who worked as members of the women’s movement or activists to improve the living conditions of women in northern and eastern Syria and the Middle East. It sheds light on the patriarchal mentality of the Turkish state, which continues to commit war crimes with its attacks in North and East Syria, carrying out targeted attacks on women, especially those who organise themselves in the struggle against patriarchy and have an important role in the society.
For years, women in North and East Syria have been organising themselves and fighting against the patriarchal mentality and for a change in society based on the liberation of women. From the very beginning, Kongra Star as a women’s movement in Rojava played an important role for women’s liberation and was built up to strengthen and organise women. But here too, attempts are being made to destroy these steps of women. As women’s movement Kongra Star and as women worldwide we will not stand still because of those femicides. We are ready to defend ourselves and to put an end to both femicide and the patriarchal mentality once and for all.

With resistance we will defend ourselves! Organized we will stop Femicide!
Şehîd namirin! – The fallen are immortal!

Here you can find the dossier in English and Kurdish: 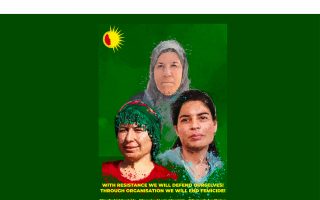 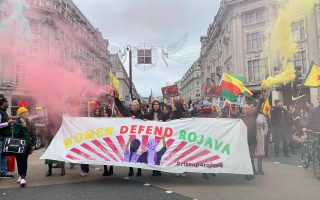 Women of Raqqa: the ideology of Abdullah Öcalan showed us our reality