Skip to Content
Home / Publications / Let us make every day a day of struggle! 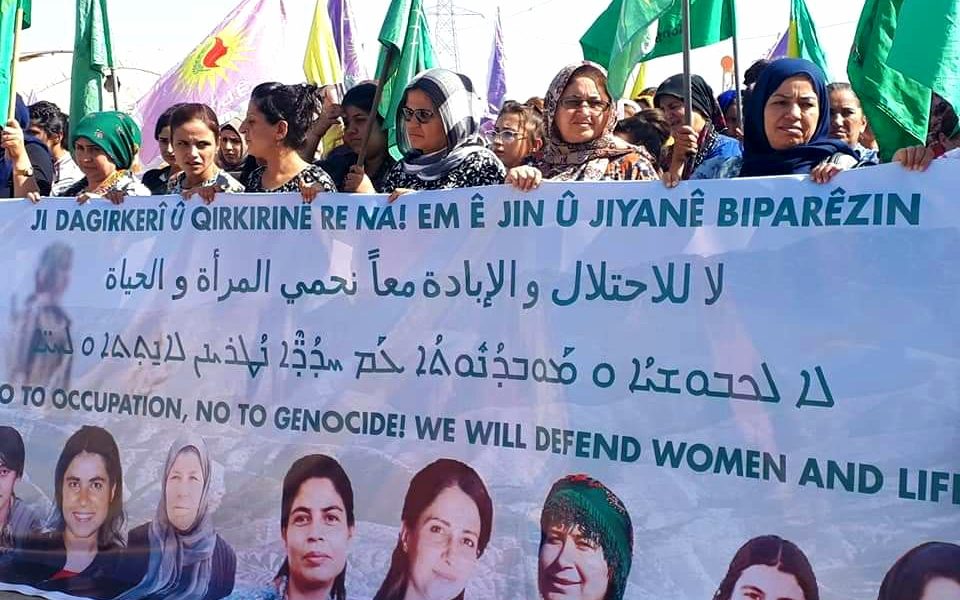 All over the world, women’s and feminist struggles are intensifying against the oppression and violence by patriarchy that has lasted for 5000 years. Everywhere women are rising up and joining together against the ever increasing patriarchal violence, the fascist attacks of the states that occupy and destroy our living spaces with their imperialist policies.

In Northern and Eastern Syria, we see day by day how the fascist Turkish state with its attacks tries to implement its occupation policy through aggression with the support of its jihadist militias, unhindered by the silence of the international community. In the Turkish occupied territories in Northern Syria – Serekaniye, Gire Spi and Afrin – we see how people are confronted daily with a reality of escalating violence, a reality that is mainly directed against women and leads to numerous acts of violence, kidnappings and femicides. In this, too, we clearly see the patriarchal and fascist mentality that is specifically directed against the multi-ethnic, multi-religious and grassroots democratic society that has been built here in recent years, led by women, whose struggle against patriarchy, whether as internalized behavior in society or the unleashed violence of the IS, inspires people around the world. But against this, people and especially women at all levels of society organize themselves and show their determination to resist.

They attack us as organized women fighting for freedom, for a world without patriarchy and war, defending their country and society. But in the face of these fascist, colonial and patriarchal attacks and the systematic murder of women and our communities, the need for resistance and self-defense by us women all over the world becomes more and more obvious. From Rojava to Canada, from Argentina to Poland, from Namibia to Pakistan, from Turkey to Mexico, women with all their anger are on the front line and lead the boisterous resistance. This resistance means struggle. A struggle that goes not only through history, but through the whole world.

Within the framework of our campaign “No to occupation and genocide! We will defend women and life”, that began October 31, we called on international and especially feminist and women’s organizations and individuals to participate in our signature campaign to strengthen our common solidarity in order to protect the achievements of the women’s revolution and defend it against all forms of occupation, genocide, imperialism and fascism. From all continents, from hundreds of different places, 368 individuals and 231 organizations have joined our call. Together we fight against the occupation in all its different forms.

The 21st century is the century of women’s revolution. The origin of our oppression is the same, the attacks are global, so our self-defense and struggle must be global. Let us organize our self-defense together as women and freedom fighters worldwide. We have to end the patriarchal mentality in order to build a society where people live together democratically, where freedom of women and nature and gender liberation are guaranteed.

We thank all those who have participated and are participating in our campaign, sending us their solidarity and strength and with whom we continue our struggle together. They give us strength and energy to continue our resistance both here in Rojava, Northern and Eastern Syria, and our common struggle for a free life and women’s liberation.

This is what we share with you and the public today, and with this we confirm once again to go forward together and send you many greetings and strength from the Women’s Revolution in Rojava. Even though we are in different areas, we tell you that your struggle is our struggle, just as our revolution is your revolution.

Çiçek Kobane’s mother: “Our daughter is detained in Turkish prison under inhuman conditions”