In memory of our two friends Saada al-Hermas and Hind al-Khedr, who were murdered in a targeted attack by the Islamic State (ISIS) on 22 January 2021 in Shadade, Heseke, we publish this dossier. It sheds light on the role of the two women who worked as activists and members of the Auonomous Administration for the improvement of women’s and society’s living conditions as well as for the communal coexistence of the peoples in North and East Syria. It sheds light on the patriarchal mentality of ISIS, which targets representatives of the Autonomous Administration and Arab tribes with its attacks in mainly the Arab areas in order to keep the region unstable and to intimidate the people in North and East Syria as well as to turn them against the democratic projects. In this context, the targeted assassination of Saada and Hind was mainly directed against women who are actively working for women’s liberation and play a leading role in building a self-organised society in North and East Syria.

We remember Saada al-Hermas and Hind al-Khedr as women who dedicated their lives and all their activism to the struggle for a democratic, pluralistic Syria and a democratic Middle East based on the liberation and freedom of all women. They show us that united and organised, we are taking decisive steps towards building a democratic coexistence, a democratic nation. But here too there are attempts to destroy these steps of women. As the Kongra Star women’s movement and as women worldwide, we will not stand still because of these femicides. We are ready to resist and put an end to both femicide and patriarchal mentality once and for all.

With resistance we will fight back! Organised, we will stop the femicide!
Şehîd namirin! – The fallen are immortal! 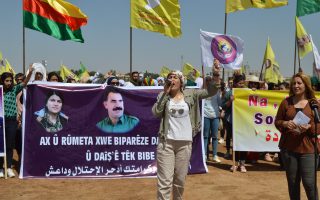