you can register now for the first International Working Brigades that will make their way to Rojava from the 13th March until the 6th April 2022! Simply write us at [email protected], we are looking forward to hear from you.The registration will be open until the 31.12.2021.

Working Brigades – „Join us, become a volunteer! Together we will defend Rojava,
work collectively and build communal life!“

The struggle of the people of Rojava has drawn the attention all around the world throughout the last 10 years. In the midst of conflict, crisis and war in the Middle East an exemplary alternative project is being realised in Western Kurdistan and North-East Syria. The people of the region resisted against oppression, liberated their land from occupation, defended it against ISIS and created the Autonomous Administration on the foundation of brotherhood of people.

Since 2012 the people of Rojava attempt to organize on the principles of the paradigm of a democratic and ecological society and the freedom of women, to develop free and dignified life. Due to the blood of ten thousands of martyres and the effort and sweat of the local people great achievements have already been reached, for example: the women’s liberation struggle, creation of regional and local, democratic self-government of the people, the realization of the right and assurance for every regional nationality, culture, language and religion to co-existence, self-organization and expression.

In a time when the crisis and chaos in the Middle East deepens due to nationalism, racism, sexism and fundamentalism, and the international capitalist forces try to force their neo-colonial projects upon the people, Rojava came on the stage of history to give hope and a new breath of life to humanity. On the basis of, and inspired by the idea of a democratic nation, developed by Abdullah Ocalan, the Rojava revolution gave new hope to the possibility of free, peaceful and dignified life. But until today the survival of this important project is not guaranteed. For more than 9 years Rojava has been under embargo. For more than 9 years Rojava has been continuously confronted with heavy attacks from outside and is struggling to defend itself. The regions Efrîn, Serêkaniyê and Girê Spî have been invaded and occupied by the Turkish state and on a daily basis threats for new attacks are being made. Connected to this the water from main supply lines and rivers in the region are being cut off and a concept of special warfare is being implemented against Rojava to cause trouble, crisis and conflicts in the regions of the Autonomous Administration. Despite all of this, Rojava proved that even under most difficult conditions it is possible to build your life with your own hands.

In this frame and understanding the reality of the constant war situation has never become a reason for the people of Rojava not to follow their dreams and to implement their ideas of a democratic life. With incredible effort the people self-organized in communes in their villages and neighbourhoods and built their own Administration from the bottom to the top. Despite lacking resources, still everyone is trying hard to realize energy and ecological projects. Cooperatives are being organized and developed as a model to overcome unjust capitalist modes of production step by step. Starting from zero, step by step the economy is being organized, developed and improved to make sure that Rojava can stand on its own feet and be self-sufficient. Next to this the school and education system has been completely changed and renewed to assure every child the possibility to study in their mother tongue. On the social side an immense effort has been given and still is given, to overcome the illnesses of sexist, patriarchal, fundamentalist and racist mentality, and to push for a way of life that is based on equality, respect, justice and freedom. Everywhere women and youth have organized themselves autonomously to work and fight for a strong-willed, independent and dynamic society and to ensure the freedom of womeneverywhere and forever.

Today as well there are living examples existing. Living examples of practical solidarity with the concept of civilian working brigades exist today, for example in Cuba and Palestine. International Brigades have been organized for the support of popular freedom struggles all around the world at different stages of history. Today we want to carry on this tradition in Rojava under the name of „Rojava Volunteers – Working Brigades“ . We want to give you the opportunity to get to know our homeland, learn about the reality of our struggle, share your knowledge and work and „sweat“ with us, so that we strengthen the international struggle for a free and comunal life together.

We call on all democrats, socialist, revolutionaries and internationalists: Join us, become a volunteer! Together we will defend Rojava, work collectively and build communal life!“
Get to know Rojava, put solidarity into practice and help us to break the economical and political embargo on Rojava!

The first Working Brigade will take place in Spring 2022 from March to April. We have prepared for you a 21 days program of political discussions and workshops, social and cultural activities, practical handwork inside a cooperative and local village and a tour to important and meaningful places in Rojava.
You can have a closer look into our program here.

If you have questions or you want to register for a working brigade, please send us an email to [email protected] 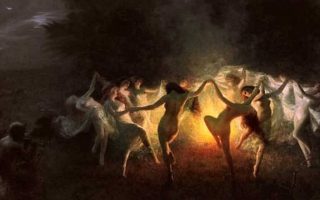 The Night of the Witches: continuing the legacy of women’s resistance to patriarchy

Turkey cuts off water to Heseke. “Without water there is no life”