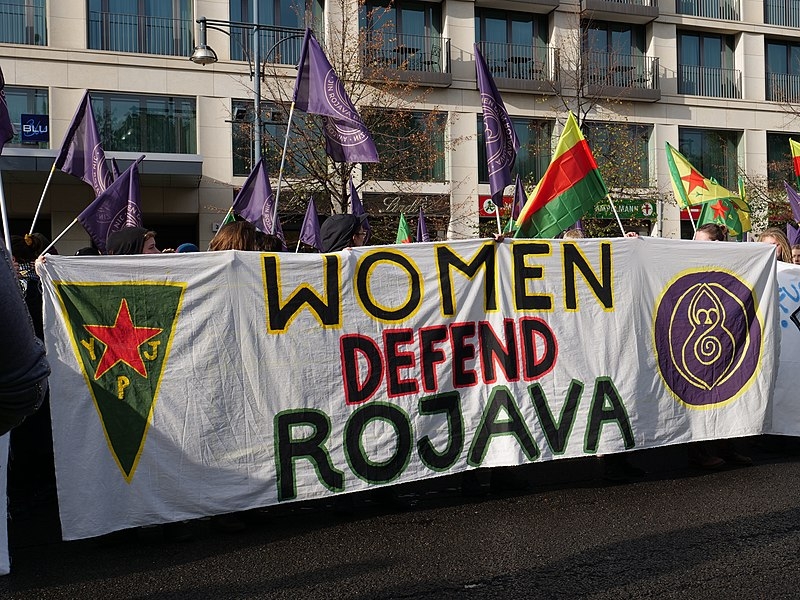 Since yesterday evening, Turkey has been bombing numerous places in Kurdistan with airstrikes. After ISIS attack in Hesekê, in North and East Syria, was successfully thwarted by the Syrian Democratic Forces (SDF), Turkey, a NATO member state, is again launching fierce attacks with numerous warplanes. Current targets are an electricity station that provides electricity to the people in Koçerat, in the region of Dêrik, where a few hours earlier thousands took part in the burial of 10 of the 121 killed in the fight against ISIS in Hesekê, Sengal, where ISIS committed genocide in August 2014, murdering tens of thousands of Ezidis and enslaving women and children, and the Mexmûr refugee camp in southern Kurdistan, where 12,000 people live. In addition, there are reports of artillery attacks on Sehba. Sehba is a region north of Aleppo where tens of thousands of displaced people from Afrin live in camps.

Again Erdogan’s drones and warplanes are flying and killing, again and again Turkish soldiers and Islamist mercenaries are trying to capture and occupy the country that was built up with effort and self-organized in the last years. However, the war in North and East Syria has never ceased, as every day in recent months battles have been omnipresent, bombs and drone attacks have been a daily threat, thousands have lost their lives in the fight for freedom or have been displaced.

We strongly condemn the renewed extensive bombing and this ongoing war. Not only because it leads to death, displacement, starvation and rape – but because it is directed against one of the strongest democratic and feminist movements in the world. Together with the Kurdish freedom movement, together with the PKK, the people here have built up a society in the last 10 years that is supposed to function in a free, solidary and ecological way.

While some want to declare this as terror, for us it confirms that the struggle for free life, the women’s revolution in North and East Syria, is a danger to the existing patriarchal and capitalist systems. In North and East Syria we can see what a feminist politics can mean, the building of a society with a democratic system based on participation of all and on self-organized structures coming from below from the people.

Far too often in recent years we have seen what it means when the Turkey launches operations like this. Therefore, it is up to us to become active now! We call on all democratic and feminist forces to unite and resist. Let’s put pressure on politicians, let’s inform the local press, let’s make sure together that the criminalization of the Kurdish movement and the Kurdistan Workers’ Party comes to an end, because this is the political ground on which this war can be waged. Let us support the self-defense of the people on the ground, be it with donations such as to the aid organization “Heyva Sor a Kurdistanê” or other actions. Let’s report on the streets, in cafes about how the international states have a share of responsibility in the war, thus contributing to the reorganization of ISIS and ensuring that thousands are displaced from their homes.

The time for freedom has come!

Long live the resistance of Kobane!

[Video] Song of solidarity for women struggling for freedom

Let us make every day a day of struggle!