WHY INTERNATIONALIST WOMEN COME TO ROJAVA ?

In many revolutions, international participation has been an important part of the revolutionary process and the Rojava Revolution is not an exception. We are living in times of global chaos, there are many different crises in the world. Time shows us, that the real face of capitalism can not be hidden anymore, it is capitalism by itself causing those crisis and becoming itself unsustainable. People all over the world are struggling for changes and searching for alternatives.
The capitalist mindset wants to make us believe, that is it the last and the most developed solution. But the reality shows us, it is the system that is the most against society ever. In the Democratic Confederal System, already with 10 years experience in Rojava, the communal life and economy, women liberation and ecologic approach are the three main pillars of the Revolution. They are offering us a realizable alternative and solution to most essential social problems. Of course, this will not happen from one day to the other and without a lot of effort, difficulties, and struggle.
Many women from all over the world are inspired by this Revolution and coming to Rojava to take part in this process and join YPJ. To join this Revolution is to give an important step in this struggle.

WHO IS THE YPJ AND WHAT ARW THEY FIGHTING FOR ?

The Philosophy of Abdullah Ocalan has become the path for liberation to thousands, not only Kurdish people. It is putting a light on a skeptical and dark vision of our future and giving us hope for a more equal and just life.
Self-defence is a basic function and inherent to all livings beings. Also YPG – YPJ were built from this basic need to defend and protect their people. But it is important to say YPG – YPJ is essentially different from the state ‘s armies.
In the first place, they are not protecting the interests of any state, neither struggling for hegemony nor wanting to invade the lands of others. They are The People and Women Protection Units.
Partipation is voluntary and always connected to the revolutionary ideology. The Kurdish people for hundreds of years have been under constant attacks and all kinds of genocides. It is the Turkish state with the help of different Islamist extremist groups as AL- Nusra or Daesh, and the interests of hegemonic powers under-knees, whose want to wipe out the Kurds from mother earth and take the profit from their ancient land. But despite all the attacks, invasions, embargoes and difficulties the Kurdish people have resisted and have not stopped to struggle for their outonomy and dignity… They also heroically defeated the Daesh and liberate the territory. Which is today known as The Democratic Confederation of North- Eastern Syria.

WHAT DOES IT MEAN AS INTERNATIONAL WOMEN PARTICIPATE IN YPJ ?

Many women from different places come to participate because they feel connected to these ideas. The fact itself, to be the only women unit is a very inspiring and liberating idea. For thousands of years, women have been shaped and oppressed by the patriarchal mentality, force to look and feel like weak beings, always to be depending on somebody or being seen as the property of a man, a mentality which is still present not only here in the Middle East. Women have been pushed out from social spheres, used as a slaver or instruments to produce children and serve to man. Women suffer violence, get kill and abuse everywhere, no matter how much “progressive” the country is where they are from. To be a woman is to be connected by this reality and by the same struggle and purpose.

All women need to know how to defend themself, be aware of their strenght, struggle for own liberation, protect their community and fight of their land.

The biggest threat for Rojava in the present is the Turkish state, which hand by hand with Islamist extremist have occupied three cities from the liberated territory, using the dirties methods and causing many war crimes. The attacks still continue despite several international agreements and with the presence and silence of world hegemonies.

To resit and against those attacks, it is not only to give own life in the struggle against fascism, but it also resists against the whole mindset, which is behind those crimes and ruling the world in our present days.

TO BE IN YPJ AND TAKE PART IN THIS RESISTANCE IS A BIG HONOR AND VERY EMPOWERING FOR ANY WOMAN!
I wish that, the women and girls who feel the common need to fight for their liberation and freedom, no matter where they are from, support and join the Rojava Revolution. I hope many as possible they can at least understand what is happening in Rojava and how important steps have been given here.
The history is now, and we are part of it. Let’s hold it strongly in our hands and protect it ! 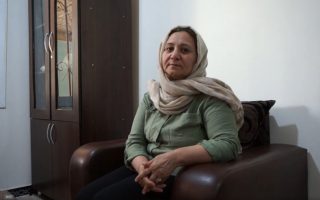 Çiçek Kobane’s mother: “Our daughter is detained in Turkish prison under inhuman conditions”

“Now more than ever, we must raise our thousands of voices!” – Cross-Border Feminist Manifesto