Skip to Content
Home / Uncategorized / It is time to be active and defend the revolution together.

On April 17, Turkey launched the “claw-blockade” operation against the guerrilla-controlled areas in southern Kurdistan. At the same time, they have intensified attacks in Rojava and Iraq is making great efforts to put an end to the autonomy of Shengal. Faced with these attacks, which aim to put an end to the resistance of the Kurdish people and the struggle of the Kurdistan Freedom Movement, the Jineolojî Center called on its network in the Spanish state to carry out actions of visibility and solidarity by holding banners. Several towns and cities of Asturies, Euskal Herria, Catalunya, País Valencià, Aragón and Murcia have responded to this call, showing in this way that they are together with the struggle of the peoples of Kurdistan and the guerrilla.

We want to remind again that as internationalists we cannot remain as observers in the face of these attacks. The struggle in Kurdistan, which puts women’s liberation at the center, is a thorn in the side of the imperialist plans of the rulers. It is our responsibility to oppose this war and defend the women’s revolution everywhere, wherever we are. We oppose Turkey’s war of aggression. We stand with the people and the Kurdistan Freedom Movement.

Stop Turkey’s imperialism!
It is time to be active and defend the revolution together. 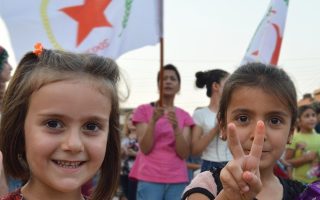 [SELF-DEFENCE 2] “The women’s defence is the defence of society, nature and all living things”