Skip to Content
Home / Publications / In memory of the Kurdish activists and politicians Sêve Demir, Pakize Nayır and Fatma Uyar

Today, 4 January, we want to remember the three Kurdish women activists and politicians Sêve Demir, Pakize Nayır and Fatma Uyar, who dedicated their lives to the struggle for women’s liberation, according to the motto: ‘You don’t get freedom, you take it’.

To this day, women are systematically and deliberately targeted by the Turkish state. With its misogynist policies, the AKP government mainly targets organised women who oppose and organise against the Turkish nationalist and fascist system based on capitalism, nation state and patriarchy.

We observe this in the ongoing attacks against women in Turkey, where hundreds of women political activists, politicians and journalists are imprisoned, such as the Kurdish politician Leyla Güven, who was sentenced to 22 years and three months. In Turkish prisons, women’s rights are massively violated, women are subjected to increasing harassment, there are cell searches where all their personal belongings such as memories, diaries, poems, etc. are confiscated, and they are subjected to isolation with the outside world due to the restriction of communication as well as social interaction.

We see this in the continuation of Turkey’s femicidal policies, guilty of the targeted and systematic murder of more than 100 women, as documented in the current campaign “100 Reasons to Prosecute Erdogan”.

And the violence knows no borders. With its imperialist policies, the Turkish state continues its violence and occupation in northern Syria against the women’s revolution. In the Turkish-occupied regions of Afrin, Serekaniye and Gire Spi, women in particular are subjected to daily violence such as abuse, abductions, torture, rape and even killings, violence at the hands of the Turkish-backed occupation forces reminiscent of ISIS methods.

Five years ago today, on 4 January 2016, the three Kurdish women activists and politicians Sêve Demir, Pakize Nayır and Fatma Uyar were targeted murdered by Turkish security forces in Silopi. Sêve Demir from the DBP (Democratic Districts Party), Fatma Uyar from the KJA (Free Women’s Congress) and Pakize Nayir (Chairperson of the Silopi People’s Assembly) wanted to go from the “Karsiyaka” neighbourhood to the “Yesilyurt” neighbourhood to actively help the civilian population there. A Turkish tank targeted them and they waited for hours for an ambulance to pick them up. The ambulance did not come and they died as a result of their severe injuries.

In memory of them and all the other women who gave their lives in the struggle against fascism and for women’s liberation, we will continue our struggle. 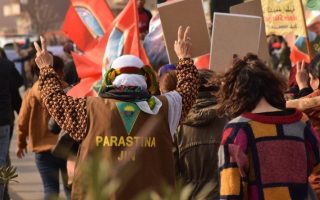 Special warfare as an instrument of domination and oppression